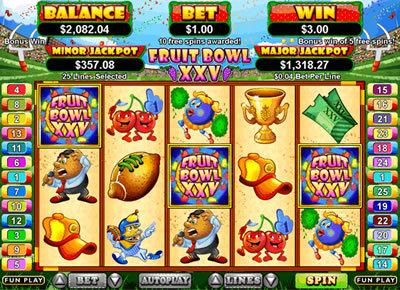 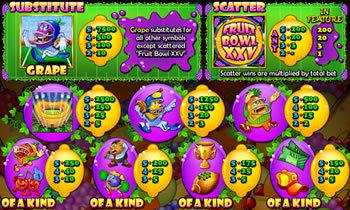 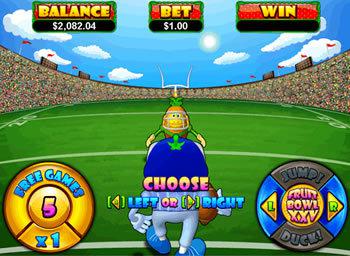 Welcome to Fruit Bowl XXV slot, with interactive bonus features, up to 25 free games, wild symbols, and a win win feature in its five reels and twenty-five lines of play.

Get ready for the excitement in Fruit Bowl XXV slots, a whacky American-style football slot game filled with fruity characters and a lot of ways to win.

I love it when the Real Time Gaming game makers come up with a new style of fruity game, like that of Fruit Bowl XXV, that isn't a three reel slot.

A lot of the symbols will only give you a payout when three of the same kind land on a line, but there are five symbols which only require two.

Two of these higher paying Fruit Bowl XXV slot symbols are the scatter and wild, but the scatter will only pay with two symbols during free spins.

The Arena, Quarterback, and Receiver symbols will give coins back when two of them hit a paid line.

The symbols in Fruit Bowl XXV slot will pay and play from left to right except for the fruit bowl icon Scatter which can play and pay anywhere on the reels.

The Fruit Bowl XXV Real Series slot has two random progressive jackpots that can be won at any time, at the end of a game. This means; keep an eye on your credits for an addition of hundreds of credits that may be added at the end of a spin.

The "Fruit Bowl Feature" Bonus Round.

When three or more "Fruit Bowl XXV" icons appear anywhere after a game, the Fruit Bowl Feature will be triggered and once activated the following football scene will appear with 5 free games and a 1x multiplier awarded.

Choose to move the football player "Left" or "Right". You will have 5 chances to make extra free games and extra multipliers. Each correct choice made will be followed by the above scene:

The "Win Win" Feature is triggered at the end of the Free Games feature only when all 25 lines are played. You will get a Win Win feature payout when your total free game wins are between zero to 10x the feature game bet. Win from 5x the bet up to 250-times the bet! 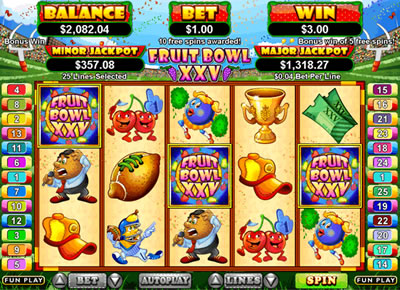