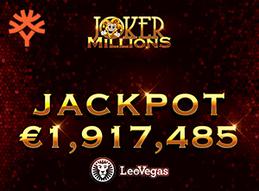 Joker Millions is one of the most popular Yggdrasil slots running today, and that's because it has a big progressive jackpot that can make players an instant millionaire. A recent player at LeoVegas found out just how much it can pay out recently by triggering the progressive in one of the largest payouts that the site has seen.

Eye on the Prize

The payout itself was worth €1,917,485, and it came for a lucky player in Norway who is remaining anonymous. A big payout like this comes a few times a year for Yggdrasil who saw similar wins of €1.12 million and €5.2 million in 2017 in the same jackpot pool, which is shared by another game called Empire Fortune. The €5.2 million prize was the largest that Yggdrasil had ever given away, and the most recent jackpot is one of the largest that LeoVegas has ever paid out to players. This means it's a pretty big deal all-around.

The Joker Millions game is a video slot that has five reels and three rows. It has a slick feel to it with a golden joker theme, and if you manage to get a joker on each reel, you'll start a re-spin based feature that gives you a chance to add more and more to the screen. Fill the entire screen up with a total of 15 jokers in this game, and you'll get the progressive jackpot. This is a fun way of tying in the progressive with the throwback theme that includes fruit items, lucky number eights, and, of course, golden jokers.

With LeoVegas, you're getting games from several of the top providers in the industry. This includes the Microgaming Quickfire platform, which in turn has Yggdrasil Gaming as a third-party partner. On top of having a tremendous selection of progressive jackpot slots, they also have one of the best live dealer game selections that you can find, and they are licensed for operation in Malta. This is a casino with a strong reputation for paying out big prizes, so it's not all that surprising that someone was able to take down a seven-figure jackpot on the mobile version of their site.