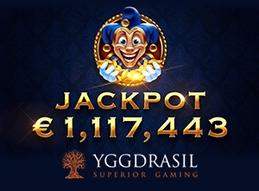 Last weekend a 32-year-old player on the Betsson mobile site won €1.12 million on the progressive jackpot slot, Empire Fortune. The late Saturday evening win by the Norwegian was just another in a string of Yggdrasil jackpots lately including a €3.5m jackpot on Joker Millions last month and €5.2m in July on the game that was won late Saturday night. The two slots share a jackpot pool so the progressive rises quickly. The July win of €5.2m  set a record for the prize pool.

Yggdrasil Gaming's CEO, Fredrik Elmqvist said: "Our jackpot pools have been very generous of late and it’s great to see one of our players winning a life-changing sum of money on Empire Fortune.

"Our progressive jackpots have now paid out almost €10m in their last three drops, but with their popularity, I’ve no doubt there’ll be paying out big wins again soon," according to a press release by the company, a subsidiary of Cherry AB.

Betsson Group (Betsson AB) is a Stockholm, Sweden based company offering a variety of online gambling products including a casino, poker, bingo, scratch cards, and sports betting. They operate nearly two dozen brands including Betsson, Betsafe and NordicBet. Betsson AB is listed on the NASDAQ Stockholm Large Cap List. The casino offers games from more than twenty developers including Yggdrasil, Microgaming, NetEnt, NextGen and others.