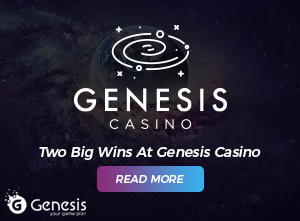 A pair of big wins have come lately at Genesis Gaming properties. These two wins total just under €250,000, so they're obviously pretty serious in size. We love seeing players take down fat jackpots, especially when it happens on a variety of different games.

Spinit Casino was the place to be for a lucky fan by the name of Marc. He was sitting on his couch taking a break from renovations he'd been working on for his home when he decided to play a few spins from his mobile device.

According to Marc, he wasn't feeling lucky at the time, but he sure does now. He expects to use some of the money to help ease the burden of the work he's doing on his home, and from there, he doesn't really know what he'll do with it.

The other win happened over at Genesis Casino, the flagship for Genesis Gaming's online casino branch. A player who goes by Matti scored a solid winning streak worth EUR 40,000, which included 35,000 on the Jungle Book game, based on the popular book and movies by the same name.

The streak itself actually started with a different game, and a total of about €5,427 was won on the Avalon title, one of the most popular games ever produced in the industry as a whole. The diversity that we're seeing with where these wins are coming from are reflective of just how many titles are available at properties operated by this company.

What you'll find with these wins is that big payouts don't always come in the form of jackpots. Instead, games today are designed in ways that you can go on serious winning streaks without having to take down a big score all at once.