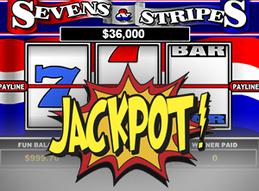 Big progressive wins these days usually come on video slots. However, Realtime Gaming's Sevens & Stripes classic slot recently awarded $36,000 to a lucky player from Sweden with its own progressive. This breaks the trend of video slots being the ones to pay out the most, and it's a great win on a great game overall.

The Sevens & Stripes slot has three reels with a single payline. It's based on a USA theme with red, white and blue motifs. Along these lines, there are three different lucky sevens: one red, one white, one blue. If you get all three of them in that order, then you trigger the progressive as long as you're betting with three coins. That's exactly what the lucky player from Sweden was able to do. It's a tough win to get, and there are some pretty significant payouts for other combinations of sevens just to show how important they are in this game.

This big win happened at Jackpot Capital, an online casino that uses the Realtime Gaming online casino software. This software has a great selection of slots, and what really makes them stand out is their selection of progressives. In fact, they have a whole series called the Real Series that have from one to four progressive jackpots added on apiece. While those jackpots aren't as large as this one, the progressive attached to Sevens & Stripes is pretty substantial as well.

It's been a while since we have seen a record-breaking jackpot win in the eight-figure range, but there have been plenty of five-figure, six-figure and even seven-figure payouts from progressives over the past few months. Three-reel slots usually have smaller progressives because fewer people play them, but a win worth $36,000 is still nothing to sneeze at. We're very happy for the lucky Swedish player who took down this payout, and we look forward to seeing other lucky winners throughout the remainder of the year. If you're looking for your own jackpot, just remember that we have plenty here in our slots section, including some of the biggest progressive jackpot games in the industry.