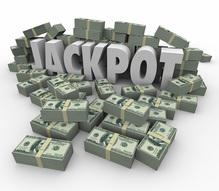 One of the biggest things to get the most attention in the online gambling world is progressive jackpot wins, particularly those attached to slots. The basic idea of a progressive jackpot is that a portion of every bet is added to the jackpot until someone wins. From that point, it's restarted with a pre-set value, and then it runs up again until there's another big winner. The SkyVegas title Sky Millions, produced by NYX Interactive, paid out a large jackpot recently along these lines.

About the Big Win

This big win came on Sky Millions. This is a game that's basically a slight variant of the Millionaires Club game, and it's been added to NYX's selection of games after they acquired CryptoLogic from the Amaya Gaming Group. The jackpot starts off at £175,000 in most cases, but it was able to get up to a whooping £2,389,933 before it was finally triggered by a lucky player just before the end of 2015.

Sky Millions uses five reels, three rows and nine paylines. It's set up as a very high-volatility experience for players who want a chance at winning a life-changing sum of money in a single spin. Like many games that have chances for a seven-figure progressive win, it uses a wealth-based theme, and this theme really fits the whole jackpot motif. While this game does not have free spins available, it does have a different bonus game, and it also has a number of sizable payouts available outside of the progressive. Even though those wins are obviously not as big as the jackpot, they are still big enough to give you a considerable win.

Progressive online slot winners get a ton of publicity because they represent the biggest goal that an online slots fan could achieve. Because slots are the most popular game in terms of the number of titles available in the industry, it makes sense that many consider a major progressive win as the biggest accomplishment a player could ever have in the industry. The lucky winner is probably very happy with his or her accomplishment, and it'll likely be one of the biggest life-changing events that player ever experiences overall.