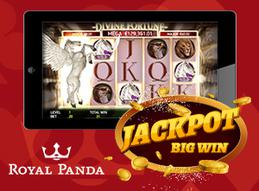 The nature of a big jackpot is to give players payouts that are bigger than anything else they would normally win in an online slot. This is the case recently at Royal Panda Casino with the Divine Fortune video slot. A player by the name of Georg picked up a total win of $140,880 on this game with a bet of just $3.20.

Divine Fortune is a progressive jackpot slot produced by Net Entertainment. It uses five reels with 20 fixed paylines and a variety of wild features. The key thing about this game is that it has three progressive jackpots, and the largest is regularly up in the six-figure range. This gives players an opportunity to win a life-changing sum of money by hitting the top prize in this slot, and it's a great example of how a progressive jackpot game can pay out in a major way, something that NetEnt is definitely used to.

The lucky winner Georg had an interesting thing happen. He described his win as feeling completely amazing and that he couldn't believe it, but after he went to sleep, he woke up feeling like maybe it was all a dream. That was the case until Royal Panda Casino called him directly to congratulate him on the big payout. He had great things to say about the casino, as any major winner like this probably would, but he still has no idea what he's going to do with the money from this massive payout.

Royal Panda Casino has lots of big winners that they announce at video slots and other games on a regular basis. They have been in action since they first opened for business in 2014, and they've been paying out major wins ever since. They have licenses in Malta and the United Kingdom, and they have games from Microgaming Quickfire and Net Entertainment. This gives them a great selection of titles for players, so it's not that surprising that big wins happen on a variety of slots from different developers at this casino. Overall, we're very happy for Georg, and we're looking forward to the announcement of the next big winner at Royal Panda.