Robin Hood and His Merry Wins Slot Debuts From Revolver 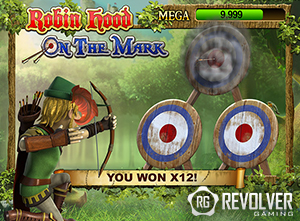 Revolver Gaming is a company known for being able to put together really great-looking games with strong gameplay elements on a consistent basis, and they've done it yet again with their most recent slot release. This comes by way of the Robin Hood and His Merry Wins slot that has seen its release this month.

The format is set up to be familiar to most players with five reels, three rows and 20 paylines. You'll have access to a few different features, and it starts with the On the Mark bonus round. This is all about shooting at an archery target, and you'll take shots at three bullseyes. If you get at least one of them, then you'll claim a bigger prize than if you miss, and this obviously plays into the archery competition from the original story. This is a fun way of tying things into the story of the game.

A free spins bonus round is available as well as a mode where you can try to take on some wanted posters while avoiding the Sheriff of Nottingham. If you can do this five times, then you'll be taken to Maid Marian where you'll get a big payout for your success. As you can see from these features, everything is tied heavily into the actual plot of the story that this game is based on, and that's an aspect of this game that helps to give players a much more cohesive and immersive experience than they would receive otherwise.

Right now, Revolver Gaming is already having a pretty good year. They've had some new releases, and they're looking like they'll have a more aggressive release schedule than what they've had before. They have built up quite a base of fans at this point because of their high-quality titles, and it's the kind of thing that players love because they take care of both the visual and gameplay sides of the equation. When you have such good titles, the popularity comes by itself, and that's exactly what they've done for a while now. We're interested to see what else they come up with over the summer, which is historically a big time for new releases.