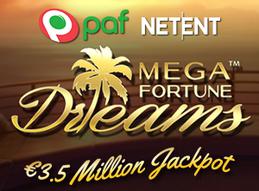 If you're the type of player who loves to get in on the action with online slots, then chances are that you're familiar with the massive progressive jackpots that can be won on some of these games. Mega Fortune, a title by Net Entertainment, has held the world record for the largest jackpot in history, and it's paid out a sizable sum to a lucky woman from Finland on PAF Casino.

This win came in the early hours of the morning on January 18, 2017. The payout was worth about EUR 3.5 million, but what's so incredible about it is that the woman only wagered 1 euro on the game to trigger the jackpot. She won it on the Mega Fortune Dreams slot at PAF Casino, and casinos are only allowed to have the original Mega Fortune by Net Entertainment or this remake of the game. It's a great title with solid features and several progressives, the largest of which always pays out at least seven figures, and it's paid out eight figures several times as well, including breaking the world record multiple times.

This lucky winner is a 62-year-old woman from Finland. She was so excited that she had trouble sleeping, and she's going to start off by using her money to take a vacation with herself and her husband. This win came just a few weeks into the new year, and that's after there was a win worth EUR 7.5 million just over a month ago on the same video slot in December.

It's hard to argue against NetEnt being the company that stole the show in 2016. Between their big game releases and the number of awards they took down, it's really easy to see how they were the biggest name all year. Others have stepped up to the plate looking to take on the challenge, however, so if they want to have as good of a showing this year, they're going to have to step it up a notch and keep things pushing along with the momentum that they have from ending 2016 strong. This big progressive jackpot is a good way to do it, and we look forward to seeing what else they have up their sleeve for this year.