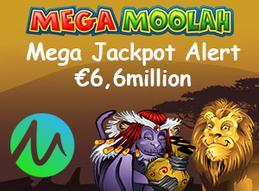 Mega Moolah is a video slot by Microgaming known for turning players into millionaires, and another one joined the club recently to the tune of €6.6 million. The lucky player was at Zodiac Casino and took down this prize on the mobile version of the game. This was close to breaking the world record for the largest mobile jackpot, worth €8.0 million and also established by the same game, and it's the second time the jackpot has paid out so far this year.

Details on the Payout

What's so incredible about this video slot win is that it shows something we've seen happen in the industry as a whole over the past few years. As players have moved more and more over to the mobile side of things, the biggest jackpots are being won by mobile slots fans more and more as well. It only makes sense, and this lucky player could tell you that it's a great change since he was able to win a life-changing sum of money while on the go with his mobile device.

This progressive jackpot is extremely important because of two key world records that it has set. The first is the world record for the largest mobile payout, which was worth €8.0 million, as we mentioned above. However, the second is the world record for the largest online payout overall, and that was set in October of 2015 and hasn't been broken since. It's clear that this game has turned tons of players into millionaires in its history of being in the industry for more than a decade.

Zodiac Casino is a popular brand among lots of different European countries, and it uses the Microgaming software to provide players with tons of top games. This includes plenty of progressive jackpots, which have allowed players like the lucky Mega Moolah mobile winner to change their lives overnight. They have a history that goes back to 2001, and they've definitely been in the industry for quite a while with more than a decade and a half of experience under their belt.