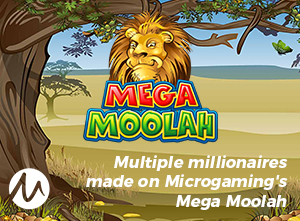 Big progressive jackpots are the name of the game for a lot of players, and Microgaming's Mega Moolah slot is one of the biggest that players think of when they think big prizes. That makes sense considering it currently holds the world record for producing the largest online jackpots ever, but several millionaires have been made by this slot so far just this year.

Big Wins From the Top Jackpot

There are a few different jackpots available in this game, but the top one is always guaranteed to be worth at least a million. In late April, a player at Grand Mondial was able to pull down a prize worth €4.6 million. That by itself is a life-changing sum of money, and many software companies would brag endlessly about awarding that much one time inside of a 12-month period. But Microgaming has awarded a lot more than that just from this one jackpot so far this year, and we're not even to the halfway point of 2018.

In January, they awarded €2.4 million, and two different prizes of €4.8 million and €1.9 million were awarded from this jackpot in February. A prize of €4.4 million was earned by a lucky player from this jackpot in March as well. What we're seeing is that it's on target to trigger between 10 and 12 times this year, which means around a dozen players being made into instant millionaires just from playing this popular online slot.

There's no denying that Microgaming has done a great job with getting the word out about this slot and its big jackpots that have been rising faster than ever, and that's probably one reason why it's been triggered so often. The more players you have playing a progressive game, the faster the jackpots are triggered for obvious reasons. However, what's so interesting about this case is that Mega Moolah is a bit of an older game, and even though they have several titles tied into the same set of progressive jackpots, none of them are particularly new. In spite of this, tons of players get in on the action every single day with this title.