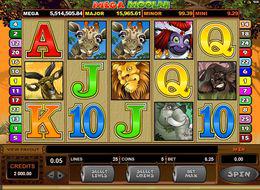 Mega Moolah is known for being one of the most important progressive jackpot online slots in the history of the online gambling industry. It is the current record-holder for the largest online jackpot ever, and now it has broken yet another record in the mobile gambling sector of the industry. This is an exciting time to be a fan of this popular slot.

The record-breaking mobile jackpot happened recently on August 28 when a lucky player took down €7,968,311.26 on this game. This is a very impressive win, but it's even more impressive to see that it came on the mobile version of the game. While mobile has been getting more and more popular to the point of accounting for almost 50 percent of the total play on Microgaming's platforms, it's just now been catching up in terms of the size of the prizes won. What this means is that we could be nearing a turning point where the mobile side of the industry takes over the more traditional, computer-based side.

Microgaming's Mega Moolah slot is known for its fun, cartoony safari theme and the fact that it's in the news for paying out huge jackpots to players on a regular basis all throughout the year. There are a total of four different progressives available in this game, and the largest is the mega, which starts back off at the €1 million mark every single time it's won. It then gets larger and larger until someone wins again, and this time it was to the tune of almost €8 million.