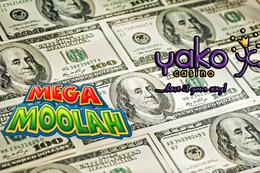 If you're a fan of online slots, then you must have heard about Mega Moolah. It's a game powered by Microgaming that has a huge top progressive jackpot. In fact, it's so large that it currently holds the world record for the largest online jackpot in history. This jackpot was getting pretty large recently, and it finally hit for one lucky player. This time, the jackpot was awarded to a player at YakoCasino.

Details on the Big Win

This big progressive was triggered at the $11,633,898.44 level, making it one of the largest wins ever taken down in history. This eight-figure sum was won in just one spin on November 5, and it's definitely the largest payout that YakoCasino has ever seen. The lucky player, going by Marcus, said that he couldn't believe his luck and that he would definitely be buying himself and his family a huge house with the winnings. With Christmas just around the corner, we're sure that things will be great for his friends and family as well.

Why is Mega Moolah So Popular?

Mega Moolah is a game by Microgaming that has been around for several years, and its cartoonish safari theme is definitely a bit dated by today's standards. However, it has remained super popular largely because of the huge top progressive (there are multiple smaller progressives in the game). This is a pretty good reason to stay popular when we see it pay out seven-figure and eight-figure jackpots several times each year on this video slot.

YakoCasino was the home of the player who hit this jackpot the most recently, and they've only been around since the third quarter of 2015. With just over a year under their belts, it's pretty incredible for an eight-figure jackpot win to come along, and that just goes to show that you can win big payouts on games like Mega Moolah anywhere you go. They have games from the Microgaming Quickfire platform as well as from Net Entertainment, meaning they also have the Mega Fortune progressive jackpot, the game that currently holds the second-largest jackpot in online history.