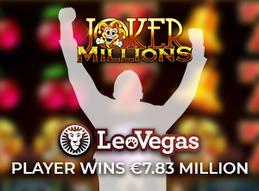 One of the most popular games by Yggdrasil Gaming is Joker Millions, and it's generally considered to be their most popular progressive slot. LeoVegas Casino offers this title as well, and they were recently the location of one of the biggest jackpot winners this year as a result.

Details on This Big Win

The progressive payout for the most recent winner at LeoVegas Casino was for €7.83 million, and it came on Yggdrasil's Joker Millions slot. This game was launched back in 2015, and it's one of the two big networked progressives that they have available.

Joker Millions has a style of play that appeals to a lot of different players with a combination of old and new styles of slots. It's a five-reel video slot with 25 paylines, but the theme and concept is based on older classic slots, which helps to create a fun mix that can be enjoyed by all kinds of fans of the genre.

We've seen some pretty huge wins in 2018 so far, and the year's not even over yet, but this is one of the largest, and it's definitely the largest or close to it for games that have never held the world record for the largest online jackpot. The only two games to officially hold this record are Mega Moolah and Mega Millions by Net Entertainment and Microgaming respectively.

This big win is the largest that's ever happened on a Yggdrasil title, and it brings the total of their progressive wins to just under €27 million. That means this one jackpot is responsible for over a quarter of the total jackpot payouts on their networked progressives, and that gives a pretty good idea of just how huge of a win it really is. While this jackpot doesn't hit as often as some, it's pretty huge when it does hit, and that's what really matters to most players when it comes to this style of game.