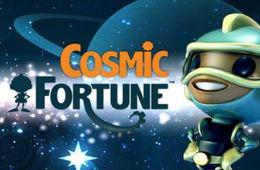 The dream for every online slots fan is to hit a big win without having to break the bank in the process. That's exactly what happened to one lucky player who was able to run up a win worth more than £100,000 with a bet worth less than £1. This is a good example of winning a life-changing sum of money on a single spin of an online slot, and it happened at LeoVegas.

The big winner in this case goes by the name Ann-Kristin Ahlin, and she's from a small town just above Stockholm. Her win was worth a whooping £103,827, and it came from a progressive jackpot where she bet just £0.46. She was extremely excited for her big win, especially since it makes her a millionaire in her native currency of Krona which gave her about SEK 1.4 million. She is a casual player, and this win just goes to show that you don't have to be a hardcore slot fan to have a great chance to win a huge payout.

Cosmic Fortune is a game by Net Entertainment that stands out for having five different progressive jackpots. This could be the largest number of progressives found in a single online slot in the entire industry. It has a cool space theme, and when you get winning combinations, new symbols fall down into the place of the winning symbols to give you chances at huge multi-line wins. Players who make it to the jackpot bonus feature will see marbles dropped from a spaceship, and if you line up at least three of those marbles in the appropriate spots, then you'll win one of the progressive jackpots.

Something that really stands out about this game is that Cosmic Fortune originally replaced a number of other Net Entertainment titles. They do this from time to time to keep their game selection fresh, so while they might not have as many games as some of the competition, they're always staying on the cutting edge when it comes to giving players the best overall experiences possible. Ann-Kristin Ahlin found out for herself how great it can be to take down a big jackpot on one of these games, and more winners are sure to come.