Joker Millions by Yggdrasil pays out €3.5m at Vera&John 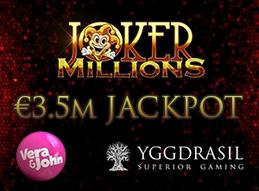 Yggdrasil Gaming’s wildly popular Joker Millions progressive slot has awarded a Swedish player 33,748,248 Swedish krona (SEK) [€3,475,894] in jackpot winnings. The lucky spin happened on a mobile device while betting just 7.5 SEK (~€0.70) per spin on October 26, 2017. The unnamed winner was playing at Vera&John casino when the lucky gambler's life changed in an instance.

Joker Millions was the first pooled progressive jackpot slot released by Yggdrasil in April 2015. Since then the jackpot has fallen several times with the biggest win happening only 17 weeks ago worth over €5m. The previous record for the game was  €3.29 million which occurred in December 2016. This October's win now bumps that lucky player to third place by a small margin.

How It Happened Blow-by-Blow

The fateful moment began with a 6x Mystery Win when a Joker landed on all five reels, with two on the center reel. The player was awarded a Jackpot spin with six Jokers placed on the reels. More landed, leaving only four blank positions on the screen and the reels spun again with all held in place. The next spin filled the final reel leaving only the bottom position on reels 1, 3, and 4. And then, Reels 1 and 4 were full too leaving only one spot to go. We can only imagine what the player must have been feeling at the time. And then it happened, the 3x5 reel set was completely filled with smiling golden joker symbols on the mobile phone in their hand and then the jackpot winnings appeared.

Although the player is probably still in too much shock to make a statement, Yggdrasil Gaming CEO, Fredrik Elmqvist said: "We love to hear of players hitting the big wins on our slots.

"The player deserves to treat themselves to an early Christmas present. We’re sure the imminent festive period will be that bit more special for them this year."

Player Paid For Their Loyalty

Vera&John's Victor Olinger, Head of gaming there said: "Joker Millions is one of many Yggdrasil titles that our players love on our site, partly due to the huge jackpots on offer." He added, "It’s always good to see them paid out for their loyalty."

Joker Millions share its progressive jackpot with Empire Fortune and Holmes & The Stolen Stones. Immediately after the win, it was seeded again at €100,000 and as of Tuesday evening, October 31, 2017, it had already climbed to €649,766. You can follow all of the world's major online progressive jackpots at Casino Listings.