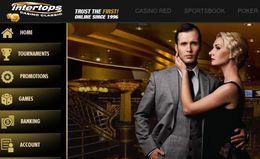 Intertops Casino is celebrating the Euro 2016 with a set of freeroll tournaments that give players an enormous amount of value. To start things off, players will have 36 different games in the tournament group stage, and each of those slots has a tournament associated with it. You can get into as many of these as you want until they run out, and then it's time for the bracket to come down.

This bracket works much like the bracket in the Euro 2016 tournament. There will be 16 games that pair up against each other in tournaments. If you finish in the top ten in any of the 36 qualifying tournaments, then you get to enter this round for free. Otherwise, you'll get the chance to play at $5 per entry into these events. These tournaments in this round will run through June 27.

Next up, players wll get in on the action with the quarter-final games at $10 per entry (or free if you placed in the top 10 of the previous round). The action continues with the semi-finals at $20 apiece, and these will happen on July 6 and July 7. The same pattern finishes the tournament off with the finals of the event, which will have a $50 entry fee. This is, of course, you were in the top ten players for the semi-final round, which means you'll get in for free. This is a cool format for a slots tournament that we've never seen before, and it's cool to see that they're being innovative in how they handle this promotion.

Intertops Casino has been around for about two decades, having first launched in 1996. They have a ton of games to choose from, which is great for this event, thanks to the Realtime Gaming and WGS software. Their license in Kahnawake and their long-standing reputation for taking care of their players makes them reliable and reputable, and they're the perfect place to get in on some slots tournament action as we make our way through Euro 2016 to see who comes out on top.