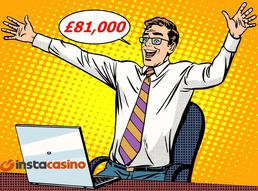 A lot of the time when people think about a big casino winner these days, they tend to think about big progressive jackpots dropping a ton of money right into someone's lap in a single spin. However, for the vast majority of people, winning at slots doesn't really happen like this. Instead, it's a wild up and down process that can be very exciting. Eventually, you can come out on top after your luck has been all over the place, and that's exactly what happened to the most recent major winner at InstaCasino.

At first, this player decided to deposit GBP 3,000, and after betting 100 pounds per spin on Net Entertainment's Guns N' Roses video slot, he ended up busting out after less than 15 minutes. Not to be detoured, our hero deposited another GBP 4,000 and had at it again. This time he continued playing Guns N' Roses and was down to under 1,400 pounds before hitting a big win worth GBP 7,250 to bring him back above break even. From there, he continued pushing and broke the 10,000 mark.

This individual then switched over to Jimi Hendrix at 200 pounds per spin, and after a couple of sizable wins, he was up to 27,000 his account balance for a 20,000 profit after his two deposits. After breaking even at Jimi Hendrix for a while after, this player moved over to Steam Tower, another popular choice, but things didn't go so well. After playing for 150 pounds per spin for a while, he dropped that 20,000-pound profit and was down to being completely break even after both of his deposits once again.

It seemed like his lucky streak might be over, but that's not the end of our story. This lucky player nailed a win worth GBP 34,120 on this video slot before moving over to Spartacus, a title by Scientific Games. At a whooping 250 pounds for each spin, this player ended up breaking even for a while before hitting a serious 43,750 payout. Realizing that he was up 81,000 at this point, he decided to pull the plug and cash out, which we think was a smart decision.