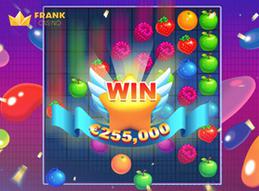 A lucky German punter, who deposited €150 into his account at Frank Casino, raised €255.000 after playing one of his favorite slot machines, Jammin Jars created by Push Gaming.

The winner signed up at Frank Casino in August on the recommendation of the casino streamer. He told the casino team that this is not his first big win as he has won large sums with other casino providers in the past. With money from previous successes, he bought an apartment. The player revealed that the Jammin Jars slot, on which he won an outstanding award, and the Razor Shark from the same provider, are indeed his favorite slots.

Jammin Jars is a fruit-themed video slot filled with sticky wild symbols, boosting multipliers and a rainbow feature that drops one or more giant fruit symbols onto the reels.

The casino operator celebrates birthday during the October, offering to new players a special welcome bonus active during the whole month, three Frank Casino tournaments, and another three special tournaments will be held by the site. Freshly registered players will get 123% bonus for the first 3 deposits plus lot of extra spins.

The casino operator will organize tournaments with leading providers in the iGaming industry. The Amatic, Pragmatic Play, and Microgaming tournaments all come with a main award of €10.000

Also, the casino provider organizes a special tournament for it's players, with a staggering prize of €160.000 The first tournament will be Red Carpet Affair with €20.000 as the main prize, then the Black Tie Tournament which comes with €40.000 and The Grandest of Eves tournament with a final prize of €100.000 for the luckiest players.

More About the Provider

Frank Casino operator was funded in 2016, and the provider is relatively new to the online gambling industry compared to the old ones. They offer a platform for big jackpots and games that performs the best. Their lobby has various games and they deliver video slots, video poker, card games, and different types of roulette games. The operator’s games are fully optimizable and adaptable for desktop and mobile devices.