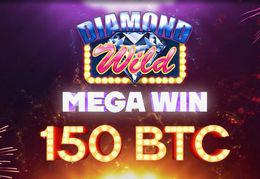 Recently at BitStarz Casino, one lucky player was able to break an important record for the site. This record came in the form of the largest win ever in bitcoin to the tune of 150 BTC. This is worth a little over $85,000, which is a sizable enough win itself, but the fact that it was won in the most popular cryptocurrency is a pretty big deal on its own.

Details on the Jackpot

The Diamond Wild online slot, a game produced by iSoftBet, was the game that paid out this win. What's interesting about this payout is that the player in question actually broke his own record that he previously held with this win, which shows that you don't have to be a one-hit wonder to make news like this.

When describing the win, the lucky player noted that he had the game Diamond Wild on auto-play, but he was right there watching the play unfold. When the big payout came, he was extremely excited.

One of the things that makes BitStarz Casino stand out is the fact that they have a ton of games that allow you to wager in the bitcoin cryptocurrency. This is a deposit and withdrawal method for them as well, and they allow you to keep your balance in this currency and play in it as well, which makes them stand out from a number of their competitors who will switch you over to a more traditional currency when you deposit in bitcoin at whatever the going exchange rate happens to be.

With games from providers like Net Entertainment, Microgaming, BetSoft and others, it's clear that this online casino has the game selection side of things down pat. They also have titles from other providers on the SoftSwiss and Amatic platforms, and this includes iSoftBet. If you're looking for the largest game selection of any online casino that accepts bitcoin, then you'll have a hard time finding better than BitStarz. Overall, they have everything that players could want with a very flexible set of promotions and a software platform that's extremely inclusive.