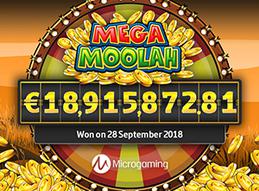 The title for the largest online casino win has been held by the Mega Moolah slot for a while now after having set the previous record in 2015. Now in 2018, it looks like they've broken their own record by quite a bit with a new win from a lucky player who was playing via mobile for only €0.75 per spin.

Details on This New Record

While Guinness World Record will have to confirm the win, it looks like the previous record of €17.9 million has been broken by more than €1 million. The new win was €18,915,872.81, and it was won at Grand Mondial Casino using the mobile Microgaming app with an Android-powered device. The winner has decided to keep their identity anonymous, which probably isn't the worst idea anyone ever had, but he's very happy about the big win, and that's especially the case since he was less than 50 spins into his session when he won the big prize.

Something that makes this kind of win pretty special is all of the hype leading up to it. The fact of the matter is that you'll win €1 million for the top jackpot for Mega Moolah at the very least, and several people take down seven-figure wins each year. However, once it breaks into the eight-figure territory, things go crazy because players from all over start putting their focus on it with more and more play instead of enjoying other titles.

As a result, the jackpot size accelerates, and if it goes a while without someone winning it, it can absolutely explode in size just like it did leading up to this big payout.

While we're just now getting into the fourth quarter of 2018, it's clear that Microgaming is going to have no problem with ending this year with a bang. This huge eight-figure win is sure to be one of the highlights of the year for the company, and they still have the holiday season left to come with big slot releases and other goodies still on the way. They're continuing to dominate the industry, and it's easy to see why with record-breaking wins like this one.