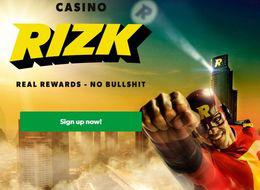 Earlier this month at Rizk Casino, we saw a big winner in a different way that what we normally see get a lot of attention. One lucky Australian player picked up three sizable wins all during her first few weeks at the casino. This is a great set of payouts for this player, and it shows that individual progressive jackpot wins aren't the only way to end up a six-figure winner.

Here's how the wins worked out. She started of picking up $15,000 in her first win. Around a week and a half later, she nailed another payout worth $25,000 after that. As if picking up that much money wasn't already enough, another week and a half later, this lucky lady picked up her biggest win yet to the tune of $95,000. That's a total of $135,000 in less than four weeks scored by the same person with three different major wins. This is an impressive feat to say the least.

Rizk Casino hasn't been around all that long, but it's proven itself to be popular with Australian fans already, and a lot of that has to do with its selection of "pokies." Pokies are the Australian term for video machines, and that generally means video slots, which this site has hundreds of. Thanks to having software from a number of different providers, they're able to give players a wider range of titles than the majority of the competition, and that gives players chances to win big in several different ways like this lucky Australian player managed to do.

The Future of Rizk Casino

Rizk Casino's future is looking very bright. They've been able to pull together an excellent operation in a relatively short period of time, and the popularity that they have gained from atypical promotions like the Wheel of Rizk have helped them to gain even more publicity than they would have received from otherwise providing players with a solid service. Overall, we believe they'll continue to grow into one of the iconic brands of the online casino industry within the next several years, especially if they keep making big, six-figure winners like this one.