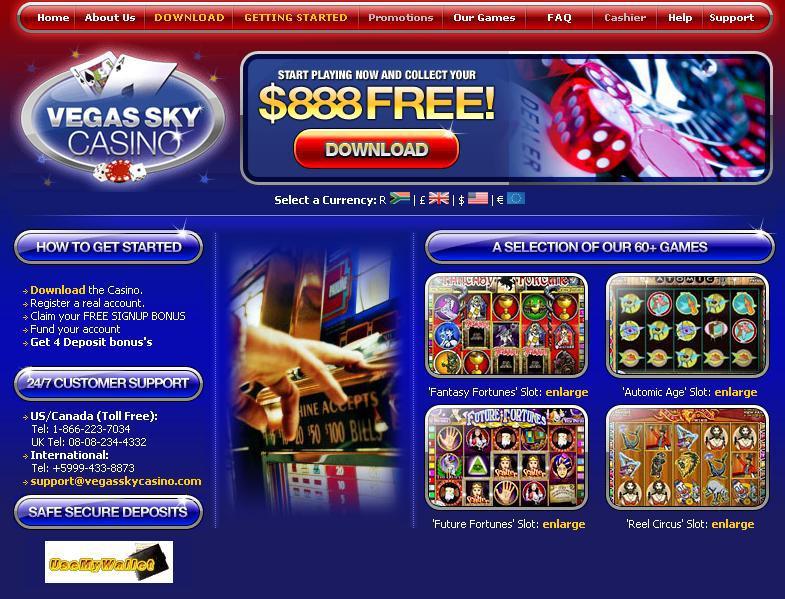 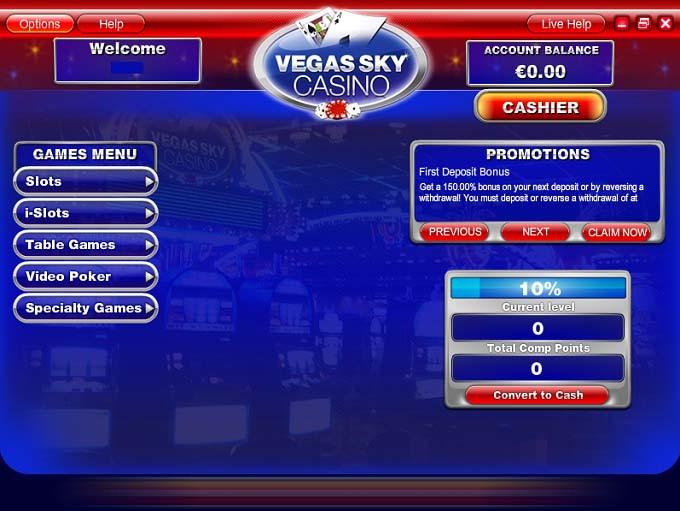 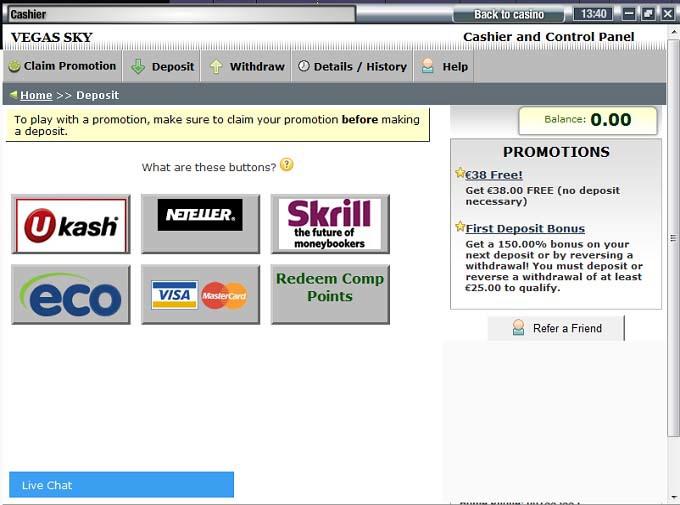 Vegas Sky Casino has only been around since 2008 and closed in 2015. They were operated by S.S.C. Entertainment, and are licensed in the jurisdiction of Curaco. Because this casino was relatively new to the game, they have not had much time to build up a reputation for themselves. In addition, while they do use 128-bit SSL encryption to protect their players, they do not post any sort of third-party auditing seals for fairness. However, they use the Rival Gaming software platform, and various other casinos who use this software have been tested for fairness.

The Rival Gaming software platform (other Rival casinos here) is unique in that they are one of the few software developers that create games for American players. Despite the availability of the software, this casino has still chosen not to accept U.S. or Canadian players, so this is something to keep in mind when choosing a casino. For international users, though, they do offer both an instant play feature as well as a downloadable software package.

A major disadvantage to this casino is their total lack of a mobile platform. They do not offer a native app or an in-browser option for mobile play. In an age where players want access to their games on-the-go, the absence of any kind of mobile platform is a big turn-off for a lot of people.

The Rival library offers over 150 titles to choose from, including slots, table games like roulette, blackjack, Pai Gow and Baccarat, over half a dozen variants of video poker and a few specialty games like Keno, Sudoku and scratch cards.

The online slot selection is Vegas Sky Casino's biggest draw. Because they are powered by Rival Gaming software, they have access to Rival's unique and interactive "i-Slots" as well as their extensive selection of video slots and three-reel titles. The i-Slots are a fun twist on regular video slots. Each of these titles offer an episodic storyline that develops as you play. A few of these titles include As the Reel Turns, modeled after soap operas, the Reel Crime series, which is a "cops and robbers"-style story, and the space-themed Cosmic Quest 1.

As an added bonus to the i-Slots, their library of slots also houses dozens of other titles with well-designed graphics and an attractive user interface. They even offer players a few progressive jackpot titles for more chances to win big.

Vegas Sky Casino also offers a variety of games for those who are more interested in strategy-based play. They have seven varieties of video poker, including Aces and Faces, Deuces Wild, Double Joker, and Jacks or Better (other styles here). In addition to these, players can also choose from 12 different styles of table game, including single-hand and multi-hand blackjack, Baccarat, craps, Pai Gow, American or European roulette, Red Dog, Caribbean Stud and War.

For players who prefer a more relaxed or social gaming experience, this casino offers two styles of keno, as well as a Sudoku game and a variety of scratch and win cards. No matter the play style, there is a game for everyone.

The casino does limit withdrawals pretty strictly, which is a drawback for some players. They only allow a maximum daily withdrawal of $2000 per day, and $4000 per week. This could be frustrating for players with large sums of winnings sitting in their account. Withdrawals are only permitted via Neteller, Skrill, EcoPayz and Click2Pay.

Vegas Sky does understand that players need support at any time of day, so they offer a dedicated support center team that is available 24/7/365. For questions, comments or feedback that are not time-sensitive, they list a few different email addresses for technical assistance, accounting and general queries. If you prefer to speak to someone one-on-one, they do have a telephone number for the United Kingdom and a separate line for international users. Be aware, though, that while the UK number is toll-free, the international number is not. However, the casino does not offer live chat support, so international players are limited in their options should they need assistance.

Overall, Vegas Sky Casino is a pretty unimpressive choice for players interested in Rival's selection of games. While they do offer a few interesting titles with good graphics, their lack of mobile play, limited withdrawal options and mediocre support services leave something to be desired.