Poker Tells and Their Importance 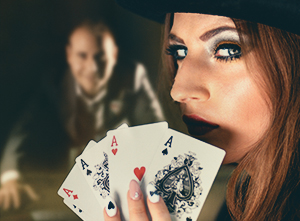 Important Gestures and Expressions in Poker

One of the most excessively discussed poker subjects, at least in my opinion, is "tells". Poker tells are your opponent's gestures and expressions. So of course this column is about tells, but not the classic discussion of how to spot and use comon poker tells, but the importance of them.

I won’t deny that, at the level of poker we often see on television, tells are an almost vital part of the game. I will argue that on the level of poker most of us enjoy on a daily basis doesn’t require any knowledge of tells beyond normal observation.

My argument isn't based on your ability to identify tells, since obviously I have no idea about your skills. But we will talk about your opponent's abilities.

Many a time I have seen players turn over their cards at the showdown and they don’t even realize what they have. This holds especially true if you play Omaha or Omaha/8. What good is a poker tell on an opponent if he/she isn't even aware of what s/he has?

Let’s take a look at tells during a poker tournament. Since most tournaments are no-limit holdem, any error can knock you out of the tournament. Even the players who are most adept at reading opponents will tell you that the science of tells is not an exact one, so why risk your tournament on a tell? Plus, there are smart players who will give you false poker tells.

Of course I am not saying that you shouldn’t take advantage of a tell if you see one. But please don’t count on tells making you much money, especially at the basic levels. Superior strategy at basic levels is to play solid poker, play the cards and play your opponent’s poker tendencies. Concentrate on building your poker skills, especially if you are a reasonably new player, and everything else will work itself out. As you progress up the poker ladder to higher limits and stronger competition, you will learn more and more about not only how to read common poker tells, but also how to not give any.