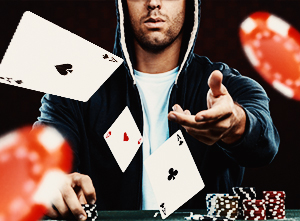 As many experts have said, poker is a game that must be viewed as one continuous session that lasts a lifetime. If one can keep this simple statement in mind, it can make the short-term variances, or luck, less painful when the underdog wins. Recently this point was driven home to me not once but twice in the same night.

I often play in a local weekly No Limit Texas holdem tournament and the following two hands came up involving my wife and me. Just before I left, she decided to play in her first poker tournament and went with me. She was very nervous and I told her to play like she had learned and not like Gus Hansen.

As it turned out, she lasted longer than I did and just missed the money. She played tight and aggressive and got all in with the odds in her favor when it mattered.

The first hand I want to discuss is the one that knocked me out of the tournament. I was under the gun and had about 900 chips left (average was 1500). When I looked down and saw pocket aces, I decided to move all in, as I had built a rather loose image and felt one of the large stacks would try to keep me honest.

Well, I got my wish. A very solid player in middle position raised all in for about 500 more to isolate me and had no other takers. When he turned over AK off suit I was elated as I was over a 92% favorite to double up. Of course if my aces had held up you wouldn't be reading about it here. After all of the burns and turns the board read Q, T, 6, T, J giving him a straight and me a seat on the sidelines.

The next hand I want to discuss is the one that knocked my wife out of the tournament. It was down to four players and she and the other middle-sized stack both got all in before the flop. She had AK off suit against his A8 suited, which made her a 69% favorite.

After the flop came K, T, 9 rainbow she was a 91% favorite. The turn was a 6 and the river was a 7, giving him a straight and her a place beside me. She would have been the chip leader and in the money if she would have won that hand.

Some people would whine about both of these as being bad beats and act like the cards owed them something. The way I choose to look at these situations is a little different and helps keep me focused and off tilt.

If I'm a 95% favorite and the 5% wins, then I feel that the next time I'll be a 96% favorite because I know that I'll win 95 out of 100 times and I've already used up one of the losses. I also know that if I continue to strive to put myself in these situations, I will be successful.

Of course this is not the only method one can use to avoid tilt. Here are some suggestions and methods that work for some players. The most important thing is to have a plan in place ahead of time. So find something that works for you and your game and stick with it:

As many before me have written, get your money in with the best of it and over the long run you will be not only a winning player, but a profitable one too and avoid poker tilt.