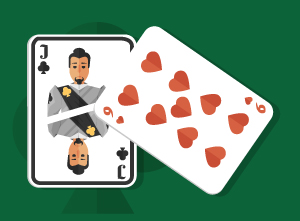 The value of J9 and J9s in Texas holdem is limited, as the majority of profit from these hands will come when you improve to at least two pair, but usually a straight or flush. Because these hands have to improve a great deal, the only games where it can be profitable in the long run are very passive ones where your opponents will let you see the turn and river for cheap. Even in these games, playing J9 and J9s from early and middle position is most likely not profitable.

Just like all hands that need to improve a great deal to win, the J9s is much stronger than the non-suited hand, but both hands can be very dangerous. If there is much aggression from an opponent after the flop, you must be able to fold these hands unless you have improved a great deal. These hands almost never win with just a pair, and even when you hit a straight or flush, it is rarely the best possible hand. I try to avoid these situations in no limit Texas holdem, so I usually fold both of these hands. For example, if you hold J9s and the final board is Ts Qs 3d 4c 6s, what will you do if an opponent moves all in? You hit one of the hands you were hoping to, but an Ace or King high flush beat you.

In addition, in this situation you have probably invested a great deal in the pot already, so the pot odds may make a call correct. Believe me, this is not a good situation to find yourself in. On the other hand, in a limit Texas holdem game, this situation is an easy call, possibly even a raising situation. Your potential loss is limited by the betting limits. The moral is you should be more willing to play hands like J9 and J9s in limit play than in no limit play.

I do not recommend playing these hands from early position in any game.

In games with many solid players, I don't play either of these hands much from late position. There are better places to risk my money. Fortunately, most of today's games are not filled with solid players. I still tend to play the J9s more than the J9, but the advantage of position allows you to manipulate the pot easier with drawing hands, so both are playable in many games.

I play both of these hands from the blinds in unraised pots, and will call a single raise with J9s. It is still important to be able to fold these hands after the flop when you don't improve a great deal, but they are playable from the blinds.