Playing Pocket Jack-Seven and Below in Texas Holdem 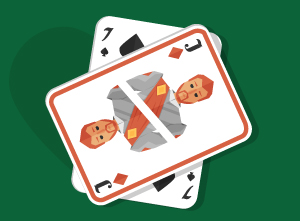 Playing pocket Jack Seven Off suit and Jack Suited and below in Texas Hold'em Poker.

With the exception of J7s, I do not recommend playing any of these hands from any position, including the small blind. Even the requirement of calling half a bet from the small blind is too much to make the play profitable over the long run. The J7 can make a straight, but never the best possible hand. The board will have to contain 8, 9, T and it is possible that an opponent can have JQ. When this happens you will tend to lose a large pot because you hit the hand you hoped to and will be betting and raising.

Even the suited cards are very weak for much the same reason. When you hit a flush, an opponent can beat you with a Queen, King or Ace high flush and if an opponent doesn't have a flush, it will be very easy to see that you likely have one and your action will end, negating any hopes of big profit.

Only the combination at an outside shot at a straight and flush that the J7s offers makes any of these hands playable, and it is only playable in the best situations. Even in these situations you will often be forced to play the hand defensively, checking and calling instead of betting and raising, so it is a borderline hand because this is not the way to maximize profitability.

In addition, all of the advice here is for limit Texas holdem. Do not play any of these hands in no limit Texas holdem except in the big blind when there have been no raises. In a no limit game, check and fold to any bet after the flop unless you have at least two pair, and I am not willing to risk my entire stack with two pair very often. There are just too many hands that can beat me. One tendency of many players in no limit play is to limp into the pot with small pairs hoping to hit a set. If this happens, your two pair is in bad shape.

I do not recommend playing any of these hands from early position in any game or situation. You will lose money on them.

Play from middle position is the same as from early position. Do not play these hands.

You can occasionally play the J7s from late position, but only in the best situations. I play it around 5% of the time from late position. If there has been a raise, I do not play, and even when I do play, if the flop does not improve my hand considerably I will fold.

As I have already discussed play from the blinds above, I will just emphasize that when the flop does not improve your hand a great deal when you are in the pot, you must check and fold to any bet. Do not go too far with these hands.