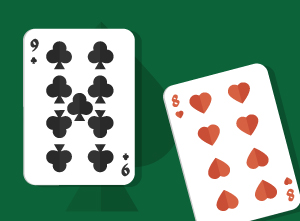 98 and 98s are examples of connectors, and in the case of 98s, a suited connector. If you have watched any poker on television over the last few years, you have probably seen some of the professional poker players playing suited connectors often. I do not recommend that beginning players play these hands very often, if at all, except in late position and the blinds. The reasons that the professional players like them, is they are well-disguised and can make both straights and flushes, often providing multi-way draws on the flop. This allows them to play a well-disguised hand aggressively, often winning pots without being forced to show down the best hand. Remember though that they have years of experience and are able to fold these hands after the flop even if they catch part of it when they are clearly beaten.

Neither of these hands is playable in no limit Texas holdem until you have gained a great deal of experience. Even then, they are only playable from late positions and the blinds. They will very rarely form a hand that is the best possible hand, so this raises the likelihood of losing your entire stack. For example, if you are playing 98s and hit your flush on the river and an opponent moves all in, what will you do? Unless the opponent is a rock, you are almost forced to call, but you will often lose to a higher flush in this situation. These can be trap hands, and trap hands are best avoided in no limit play for new players. For this reason, all of the advice contained below is for limit Texas holdem only.

Do not play either of these hands from early position. The long-term expectation is negative in any holdem game.

Neither of these hands should be played from middle position in most games. In very loose limit games with no pre flop raising, it can at times be profitable to play 98s, but you must be disciplined enough to fold on the flop if you haven't improved a great deal.

I avoid playing 98 in late position except in the loosest games. If you folded it 100% of the time, it would not be incorrect. In unraised pots in limit Texas holdem, I do play 98s from late position most of the time. The advantage of acting last can make this hand profitable, especially when you get a good piece of the flop and are able to control the size of the pot.