Playing Pocket Seven-Six and Below in Texas Holdem 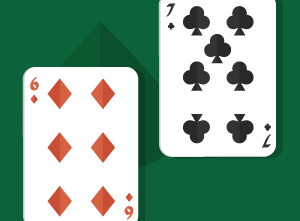 All of the hands 7-6 and below, with the exception of 7-6s, which is covered by itself in another section, are unplayable in most situations in Texas holdem. The best advice for beginning players is to always fold these hands. The 75s and 74s can be playable from late position in certain games, but you must have a very solid understanding of poker and your opponents for this to be profitable. For this reason, the best play is a fold.

These types of hands are the single biggest leak in may new holdem player's games. Playing these hands, especially from early or middle position, is a constant drain on your bankroll. I know poker players who have never played any of these hands from any position other than the big blind, and they are very solid players.

I do not play any of these hands from early position in any game or under any circumstance. It is impossible to play them profitably.

Exactly like my advice from early position, these hands are unprofitable from middle position in all games.

Until you have a great deal of experience and are a solid player, especially your post flop play, you should fold these hands from late position. As you improve, you will see a few situations where you can play hands like 75s and 74s from late position, but most of these situations involve the play of your opponents as much as your hand.

In a raised pot in limit holdem, if it is a single raise and at least four other players (five or six is better) will see the flop with you, you can call with 75s and 74s. This creates a large enough pot to allow you to draw profitably to a straight and / or flush if the flop is favorable.