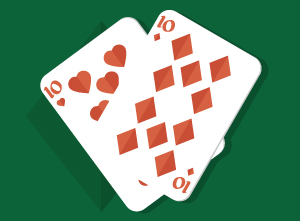 This is very important so your opponents can't put you on a hand. The first decision to make is if you are even going to play smaller pocket pairs. It depends a great deal on the make up of your opponents and the action at the table. If many pots are getting capped pre flop, or a few players are entering every pot with a raise, you need to decide if it is worth playing for two or more bets before limping into the pot.

TT can be a tricky hand to play from early position. Even when the flop doesn't contain any cards higher than your Tens, and this doesn't happen as often as you would like, many players will call a bet with over cards hoping to hit one of them on the turn. The other possibility, especially in a no limit game, is one of your opponents could be slow playing AA KK QQ or JJ, or hit a smaller set. When this happens, you will lose a big pot. Keep this in mind, and even though it may be hard to do, you will have to fold pocket Tens at times even when there are no over cards on the flop. I do not recommend calling large bets in this situation.

In situations where it is correct to fold with TT in early position, you can sometimes enter the pot in middle position. This is particularly true when your remaining opponents tend to limp instead of raise when they enter the pot. I still play TT for set value for the most part, but also am able to pick up the pot when the flop doesn't hit anyone by betting. Though I don't recommend betting all of the time that you miss the flop, if you don't bet, the only way you can win the pot is when you show down the best hand.

Late position is the best place to enter the pot with a raise, especially when none of your opponents have shown aggression. You can of course win the pot pre flop, but even if you don't you will often be able to see the turn or river for free, as most players will check to you because you have shown strength pre flop.

The blinds are the place that I never raise with TT. Therefore, I am always playing it for set value from the blinds. The reasons for this are that when I hit a set my opponents will have no way of putting me on a set, and I am getting a discounted look at the flop, improving my pot odds considerably.