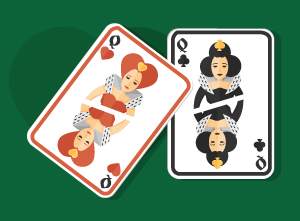 One of the four best starting hands in Texas holdem, QQ is one of those hands that if played incorrectly can win you small pots and lose large ones. Of course we would like to avoid this when possible, so here are some suggestions on the best way to play pocket Queens.

I raise over 95% of the time from early position with QQ in both limit Texas holdem and in no limit Texas holdem. The biggest reason to do this is to make the players with Aces with small kickers fold. Many players limp in with any Ace and the goal is to discourage this. If you get re-raised, you will have to make a decision based on the ability of the player who raises. Especially in a no limit game, you don't want to end up all in against AA or KK. If you get re-raised and decide to play, I would recommend calling if you have plenty of chips to see if an Ace hits on the flop.

Now, here is a very important point that pertains to every position. If an Ace hits on the flop and it is checked to you or you are first to act, you must bet. This may be difficult, but you have shown great strength pre flop and your opponent may not have an Ace. The only time I won't bet in this situation is if both an Ace and Queen hit on the flop, and even then I will usually bet to protect against a straight draw. If you bet and are called or raised, then you may want to get away from the hand. This also depends on your opponent's skill level, but most of the time you will be way behind in the hand.

If you are the first one into the pot, you should play the same as from early position. When there are limpers in front of you, you need to raise enough to isolate them if possible. The times that there is a raise from an early position player, the correct play depends on your read of their hand. If you don't feel confident in knowing what they have, it may be best to re-raise to see if the play back at you. Of course, if they do play back at you, you may have to lay down the Queens.

For this reason, it may be correct to call and see the flop. The problem with this is that if the flop is all low cards and they bet into you, you don't really know where you stand in the hand. They could have a wide range of hands such as AA KK QQ JJ TT AK AQ AJ or a set. This is a very difficult position to be in. Because of this, I will usually re-raise pre flop to get a better feel for where I am in the hand.

Most of the time the correct strategy for late position play is the same as from middle position. The difference is that you will almost always be last to act for the rest of the hand, which is a great advantage.

When playing QQ from the blinds, if there are many limpers, I will usually check / limp and play for set value in limit play. A raise is not very likely to get anyone to fold for one additional bet because the pot has so many bets in it. On the other hand, if there are only a few players, a raise may get one of them to fold. Remember that you will be out of position the rest of the hand. In no limit, you should attempt to raise enough to play the hand heads up. By raising in the blinds, you are showing a great deal of strength, and when the flop misses your opponent, you should be able to take down the pot quickly.