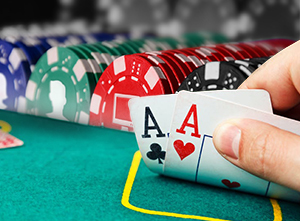 Over the last several years, millions of people have watched professional poker players on television and decided to join in the fun. Many of these people just play poker for fun, so they can make a big bluff or say “All in” and feel like a pro, while never putting in the time and work required to compete on a high level. Some of these new players do want to become professional poker players though. However, few of them realize what it actually takes to reach a professional level of play. So, if you are one of the few who believes that they have what it takes, here are a few things you should be aware of and think about.

Professional poker players have spent years practicing and studying the game of poker. They have worked harder at being successful than most people in “regular” jobs.

Most professional poker players have gone completely broke at least once in their poker career, many of them multiple times. Most of them have also spent hundreds, or even thousands, of hours grinding out small profits at the low limits, building up enough bankroll to move up.

Winning professional poker players don’t play on feel or hunches. Every move they make at the table, whether calling, betting, raising or folding is a well thought out strategic decision. They are always gathering information, even when they aren’t involved in a hand.

Professional poker players understand and utilize table and game selection. The best players don’t let pride or ego stand in their way of finding a game they can beat. The 10th best poker player in the world is still the worst player at the table if he or she is playing against the 9 best players in the world. Though many players like the fame and glory that comes with being in the public spotlight, most people understand that the bottom line is how much profit can you expect to take from any given game.

Though it is not a bad idea to test your skills occasionally against possibly better competition, there is never any shame in playing against players who are not as good as you. This is one of the big signs of a professional player.

Imagine being a player as famous as Doyle Brunson or Phil Hellmuth. No matter where you go or what game you are playing in, someone is gunning for you because they want to be able to tell their friends they beat the famous “whomever” in a hand of poker. Of course, the best players will use this information against their lesser opponents. The true professional doesn’t care if the amateur wins a pot against them if the amateur has lost multiples of that pot trying to win it in earlier hands.

To be a true professional poker player you must be able to analyze your own play completely and honestly, so you can realize when you may be just having a bad run of cards or when you are playing poorly. Most good players are extremely hard on their own play and are not happy with anything less than perfection.