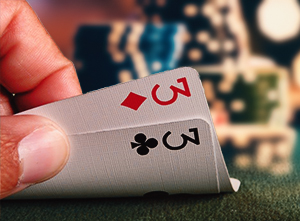 Many players have a hard time correctly playing medium pairs in no-limit Texas holdem. If you know how to play medium pairs correctly, they can make up a very large portion of their profit at the tables. For our purposes, the middle pairs are fives through tens. Many people don’t bother playing twos through fours as you can give up a great deal of profit when losing to higher sets. I do play them in certain situations, but I can’t argue with not playing them at all so we aren’t discussing them in this column.

The first thing to understand is that you will flop a set roughly one out of every eight times that you have a pocket pair. This information is vital in your decision to play a medium pocket pair. What this means is that for it to be profitable, you need to win, on average, more than eight times the amount you put into the pot before the flop when you hit your set. So the first thing to consider is how much money your opponents have on the table and the likelihood that you will face a raise behind you when you enter the pot.

One of the most profitable places that I play medium pairs is when an early position player with a deep stack makes a raise. This signifies strength and they are likely to pay you off when you hit your set because it will be hard for your opponent to put you on a hand. For this to work, you must be disciplined enough to fold your hand when the flop does not give you a set. Too often I have seen players lose a large pot after calling an early raiser with a pair of eights or nines and the flop comes 2 4 6.

It is very likely that the early position raiser has a higher pair than you, so I don’t recommend furthering your involvement in the hand. Most of the time I limp in with medium pairs, but it is also a good idea to raise with them occasionally to mix up your game. You don’t want to become predictable to your opponents.

As you move up the ladder and start playing at higher limits with better competition, you will find that deception becomes an even larger part of the game than it is at lower levels. It's also more difficult to get paid off with your big hands, so being able to play medium pairs profitably can turn a losing session into a winning one.