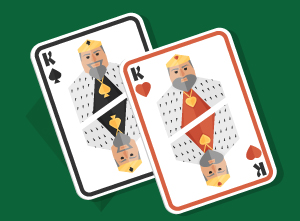 As the second best starting hand in Texas holdem, KK is a hand that you will make a large amount of profit with over time. Knowing how to play it correctly pre flop will help maximize this profit. Here are position specific strategies for playing KK.

The most important thing to realize is that many players will limp in to see a flop with any Ace, so it is very important to raise with KK because you don't want players with A5 or A8 to have a chance to catch an Ace for cheap. Raises should be calculated to give you the best chance to play the hand against one or two opponents at most. In limit Texas holdem, I suggest always raising pre flop in every position with KK. I continue betting after the flop until I am clearly beaten. Even when an Ace hits on the flop, it is a good idea to bet, because you have shown strength before the flop and it is possible that your opponent does not have an Ace. If you check and your opponent bets, you will be forced into a difficult decision, so a bet is your best option.

Raising from middle position is correct unless one of the earlier players has already raised. Even then, it is usually correct to re-raise. You want to isolate an earlier player while thinning the field behind you. By re-raising an early raiser, it will now cost three bets to see the flop for anyone acting behind you, and they will very likely only see the flop with their best hands. This will give you valuable information for correct play after the flop.

If an earlier opponent has isolated himself or herself, you can decide whether to call or raise. By calling, you will have a well-disguised hand that will often allow you to collect extra bets on the flop and afterward when an Ace doesn't hit. If there has not been a raise, you must raise to avoid letting the blinds see the flop for free.

If only one or two players are still in the hand, I will occasionally limp / check in the blinds in hopes of trapping, but most of the time I will raise. In limit Texas holdem, very few players will fold pre flop for the extra bet and this is a case where it is very likely you have the best hand before the flop and are building value through a larger pot. On the other hand, a raise form one of the blinds is usually a clear indication of a very strong hand so your hand will not be well disguised. As a large part of Texas holdem play involves your table image, if you have been playing very tight, you may get no action after raising in the blinds. If you have been playing loose, you will stand to receive more action as your opponents, at least those of them paying attention, will not give you credit for a strong hand.