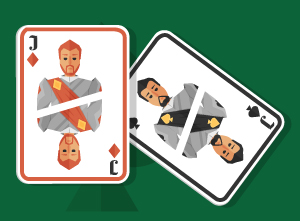 Pocket Jacks are one of the most difficult hands to play well in Texas holdem, especially no limit Texas holdem. As there are three cards that can hit on the flop that are higher than the Jacks, you will often be unsure of where you are in the hand. Because of this, I try to win the hand before the flop about 50% of the time and play for set value the other times. It is very important to attempt to play JJ heads up if possible when you are playing for a raise, as the fewer people in the pot with you, the less likely a Queen or King will hurt you. Always be wary of an Ace on the flop with JJ. Just like with KK and QQ though, when an Ace flops you must bet to give your opponent a chance to fold.

The best play in a normal game is to raise from early position most of the time. The object is to get the Aces with weak kickers and suited Kings to fold. Yes, many players play suited Kings, especially at the lower limits. In a higher-level game with only a few players seeing the flop, I lean towards limping with JJ and try to win a big hand when I hit a set.

From late position, in most games you need to use your positional advantage against your opponents. I prefer to isolate an opponent and make a move after the flop unless it appears very dangerous. Once again, against strong opposition, this is a good place to call instead of raise and win a big pot when you are able to hit a set.

I almost always play for set value in the blinds with JJ. Your hand is very well disguised and you can get away from the hand inexpensively when the flop does not look good for you. Even when there has been a raise and everyone has folded around to you, by calling instead of raising, your opponent will have a hard time putting you on a hand. In addition, your opponent has already isolated himself / herself, giving you the best possible chance to win.