Playing AT in Texas Holdem 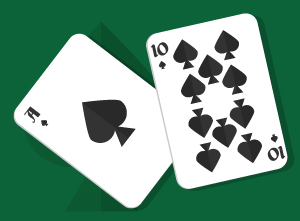 AT and ATs are hands that tend to win a small pot or lose a large one, unless you get a favorable flop and can build a pot towards a flush, straight or two pair. For this reason, I usually don't play it when faced with any aggression. Consider that in most games, every player will play every hand that has you dominated, no matter what the circumstances are. Hands like AA AK AQ and AJ are always played, and usually for a raise. It is too steep to dig out of this hole very many times. On the other hand, in an unraised pot there is a very good chance that you may have the best hand, so you can play it aggressively. This is a clear hand that either should be folded or raised. You can play it, especially ATs, more liberally in limit Texas holdem than in no limit.

In the majority of loose / passive holdem games, it is correct to play from early position because there are usually four or more people to each flop. This gives you the additional boost in potential winnings to overcome the possibility of being against a better hand and being out of position. In a tight / aggressive game with better players, it is usually correct to fold these hands from early position. If you are fairly new to poker, this may seem to be strange advice, but take my word for it; you don't want to play AT out of position against solid players. This is a quick way to going broke.

You can play more often from middle position, but I recommend entering the pot with a raise. You would like to force the players between you and the blinds out of the pot for positional advantage as well as find out if one of your opponents has a stronger hand. If a solid player raises the pot from early position, I recommend folding AT and only playing ATs if you think others will enter the pot, to build it somewhat pre flop.

From late position, if no one has shown aggression, you should enter with a raise. If a loose player has raised before the flop, you may also want to enter with a raise, however when a solid player has raised, you may still want to fold. Once again, the ATs is much stronger than AT so you can play it more often, especially with position. The important thing to remember with position is you can often manipulate a free look at the turn or river through solid post flop play.

In limit play, you will usually be getting the correct pot odds to call a raise from the blinds, but in no limit play, especially against a good player, I will often fold to aggression. Hopefully you are starting to see the theme of not playing semi-weak hands out of position. Once you gain the experience and discipline to understand these concepts, you will see a great improvement with your game.