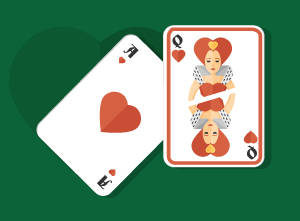 AQ is a powerful hand, especially in limit Texas holdem. It is one of the top five or six hands and should show a great deal of profit over time. In no limit Texas holdem, it still is powerful, but you must be careful with it. You are dominated by AA KK QQ and AK and you are at 50/50 against any pocket pair Jacks or below. An AQ is a drawing hand in that it must almost always improve to win at a showdown. That is not to say that you can’t win unimproved by forcing your opponents to fold, but you don’t want to show down an unimproved AQ very often or against more than one opponent.

Many authors have differing viewpoints about playing hands like AQ. Some say that it is a drawing hand so you want many opponents while others say you want to play heads up. For the most part I want to play with only one or two opponents, so I will be able to win the majority of the time with top pair. When you hit top pair, you have a great kicker. I have won many pots with AQ when a Queen hits on the flop and an opponent with KQ pays me off, sometimes even betting and raising with me.

In limit play, you should raise from early position with AQ almost 100% of the time. You have a very strong hand and will have many weaker hands call in most spots, so you will be building a pot with a stronger hand than most of your opponents. On the other hand, in a no limit game, while you should raise most of the time, if it is a very tight game you may consider limping to see what your opponents will do. In a game with many good players, they may fear a limp from early position more than a raise.

When an early position player enters the pot with a raise, in a limit game you should re-raise to isolate your opponent. In a no limit game, the clear play is questionable. If you raise and then the early position player moves all in, you will have to fold unless you have a very strong read, as you may be dominated. In this case it would have been better to call and see the flop. On the other hand, if the early position player does not have a huge hand, a raise will let you lead the rest of the hand. I tend to re-raise most of the time because I want to find out how strong my opponents hand is, but there is some danger in this. If the early raiser is a good player, he or she may call your raise with a hand like AA or KK to trap you. In other words, the better your opponent is, the more I recommend just calling instead of re-raising.

From late position you will usually raise to either build the pot with your strong hand or force the blinds to fold. You can also attempt to isolate an early position raiser with a re-raise. You don’t have to play as aggressively as you do from the other positions because of the large positional advantage you will have throughout the hand.

When you will only have one or two opponents you may choose to enter the pot without a raise, but otherwise I suggest a raise. You will be giving away the strength of your hand but you stand to have one of the best hands, if not the best hand, before the flop so the bet is one of value.