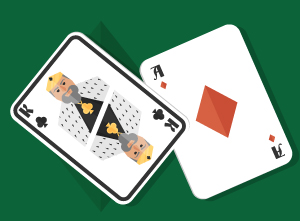 Note to reader: As you are reading this series of “How to play” different starting hands in Texas holdem, you will notice that I have not separated the suited and non suited versions of the starting hands. Though a suited hand is better than a non-suited by a small percentage, overall they are played basically the same way before the flop. In hopes of not duplicating large portions of each article in the series, both hands are combined in one and I will mention within each article when there is a difference based on being suited.

AK is arguably the third best starting hand in Texas holdem, but that doesn’t mean that it is easy to play. This hand plays best against no more than one or two opponents. The more opponents you have, the more likely you will lose the hand. For this reason, unless you are last to act and there are already only one or two opponents, you must raise before the flop. In a limit game, I recommend raising even in the above situation, as it is very likely you have the best hand and you should build the pot because you will win a great percentage of the time.

I want to add one other note pertaining to tournament play. Many players do everything they can to get all in pre flop with AK in tournament play. While it is correct that you must win a few coin flip hands to win a tournament, you must realize that against any pair below Kings you are only about 50/50 and against AA or KK you are in very bad shape. The only hands you dominate that could possibly play against you are AQ and maybe AJ. Unless you are desperate, I suggest raising and seeing the flop without getting all in, in a tournament. One big mistake or one unlucky hand and your tournament can be over

From early position, you must raise with AK to thin the field. Remember that you do not want more than one or two opponents. In no limit, your raise should be three to four times the big blind, and should be consistent with your early position raises with other hands.

In middle position your goal should be to isolate any early position players who have entered the pot and force the blinds to fold. The best post flop conditions for AK are when you have position and only one opponent.

Late position play has the same goals as the other positions. In addition, you must do everything you can to get the blinds to fold. The blind hands are very dangerous because if you don’t hit a pair, even a pair of threes or fours will beat you. Also, it is often safe to bet on a ragged flop, but ragged flops often hit the blinds. Do not make the mistake of letting the blinds in cheap so they have a chance to catch something.

In limit play, you should raise from the blinds no matter how many players are in the pot. Though you probably can’t get any of them to fold, you should build a large pot because you have a very strong hand and will win more than your share of the hands. Of course your hand will not be very well disguised because a raise from the blinds is a show of great strength, but I still recommend it. In no limit play, everything depends on your opponents. If one of them has raised and already isolated himself / herself, you may just call in hopes of trapping, but most of the time you should raise to get a feeling for the strength of their hand. If there are many limpers, you should raise to thin the field.