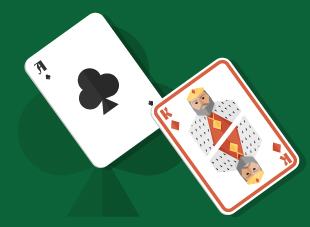 In limit Texas holdem, AJ and AJs are very powerful hands that will show a profit in the long run even if you make a few mistakes with them. However, in no limit Texas holdem they can be trap hands that must be played well to keep from going broke. For this reason, most of the discussion below will deal with no limit play. Also, realize that the AJs is much stronger than the non-suited hand. This often gives you more outs, even when you are against a better hand.

From early position, or when you are the first into the pot from any position, you need to raise. Though this does usually thin the field and force the blinds to fold, the reason to raise with AJ is so you can get a feel for the strength of your opponents hands. If you are up against an AA AK or AQ, the best time to find out is before the flop. Of course your decision when you get re-raised will depend on your knowledge of your opponent, but if it is a tight / solid player, you will need to tread carefully. I will often fold AJ in these situations, but will see a flop with AJs to see where I am at in the hand. The danger is hitting an Ace on the flop when you are dominated. If an Ace hits and your opponent moves in, you are almost certainly beat, or it is a bluff. Sometimes it is very hard to tell which.

I play AJ and AJs aggressively from late position. This allows me to use my position to maximum advantage after the flop and even when I am up against a better hand I have the opportunity to manipulate the pot size and the ability to get free cards on the turn or river. I will still fold to aggression from the best players, but for the most part it is best to lead the hand from late position by forcing your opponents to play through you.

In an unraised pot, you should alter your play from the blinds with these types of hands. In a limit game, a raise will rarely force an opponent to fold for a single bet so if you raise it will be to build the pot. This is correct at times, so I recommend raising about half the time from the blinds. In a raised pot, you will usually want to play, but keep in mind you will be out of position the entire hand and if you are dominated, you will lose the maximum amount from early position.