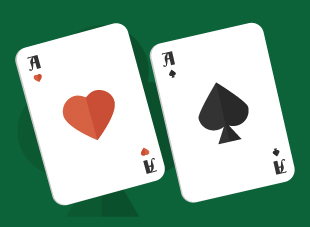 The best starting hand in Texas holdem is AA. Below you will find information about the correct pre flop strategy with AA.

In both limit Texas holdem and no limit Texas holdem, the correct play is to raise from early position with AA. You want to play against one or two opponents at most, so your raise should be calculated to accomplish this most of the time in no limit. The only exception to this rule is if you find yourself in a situation where you are sure one of your opponents will raise behind you. In this case you can limp in and re-raise after your opponents raise, or just call and trap him or her. After the flop, you should play aggressively until it is clear that you are beaten. For instance, if the flop contains three cards of the same suit, one that is not suited to one of your Aces, and you get strong action from an opponent, you may be in trouble. Unlike most starting hands, the biggest advantage with AA is you don't have to worry about any over cards hitting on the flop, or turn or river for that matter. For this reason, it is the best hand to trap with, or slow play to some degree, against aggressive opponents.

As you have the same goal of playing the hand against one or two players, the opponents who have already acted will determine the correct play from middle position. In middle and late position, you will often have an opportunity to isolate an earlier opponent and be able to play them heads up with position. If an opponent has entered the pot, this should be your goal. The biggest possible mistake to make is letting the blinds have a cheap / free look at the flop and have a chance to catch two pair or better. If no one has entered the pot, raise the same as you would in early position with hopes that you will have one see the flop with you.

Played much like middle position, the correct play depends on the prior action. Try to isolate one or two opponents and extract the maximum amount from them. If there is an early position raiser and everyone has folded to you, it may be better to call instead of re-raising. This player has already isolated himself or herself and they may very well bet into you strongly on the flop allowing you to win a big pot. If there are limpers, you should raise in order to thin the field.

Play AA from the blinds just like you do from late position. Manipulate the field by betting an amount that eliminates all but one or two opponents. Once again, if someone has raised and they are your only opponent, your best play may be to call, as they have already isolated themselves.