Playing A9 and A9s in Texas Holdem 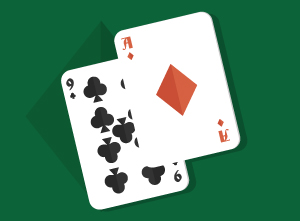 A9 and A9s are difficult hands to play profitably in both limit and no limit Texas holdem. When the flop contains an Ace, you must usually play cautiously because one of your opponents may have an Ace with a better kicker, so it is difficult to maximize your winnings when you have the best hand while minimizing your losses. Even when you hit top pair when the flop comes nine high you may still be behind to a higher pocket pair or a set, and even when you are ahead, any King Queen or Jack on the turn or river may beat you. For the reasons listed above, I rarely play A9 or A9s in no limit holdem, and only play them in certain situations in limit holdem.

In a no limit Texas holdem game, you should always fold A9 from early position. In certain no limit games with very little pre flop aggression and players who will take their hands too far, which is a rare game, you can enter the pot with A9s, but if the flop doesn't give you four to a flush, two pair or better, you need to get away from the hand. If you have any doubts, it is best to just fold before the flop. In most of today's limit games in which many players see the flop and continue chasing poor hands, you can play A9s from early position. Most of the value in this situation comes from the hand being suited and the ability to build a large pot when you are able to hit a big hand. You don't stand to win often enough with just a pair of Aces in these games to make the non-suited A9 profitable from early position.

If you are the first one into the pot or no one has raised before you, I suggest playing the same as from early position. If the pot has been raised from early position, it is correct to fold A9 99% of the time and A9s around 90% of the time. The likelihood of your hand being dominated is just too great to play very often, and you may still be re-raised from late position.

From late position, if none of your opponents have shown aggression you should enter the pot with a raise to try to find out the strength of your opponents hands and force the blinds to call an extra bet or fold. The same words of caution mentioned above apply to your play after the flop. Proceed cautiously even when you hit top pair, unless you have a redraw to an even stronger hand.

Unless there has been a great deal of aggression from my opponents, I usually see the flop with A9s from the blinds, even when I feel I am behind in the hand. The reduced price to enter the pot gives enough of an edge to make a correct fold a call. I am still very cautious with A9, and will fold it if I feel I am behind.