Playing A8 in Texas Holdem 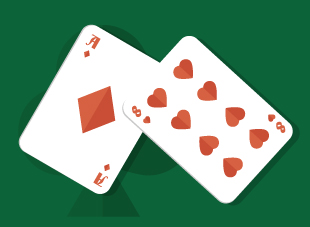 In most games A8, often called the dead mans hand, is a poor hand and I fold it around 90% of the time. Realize that any player with an Ace and a higher kicker will be in the pot with you and you may be forced to pay them off all the way to the river and you don't have any straight or flush draw potential. The A8s is slightly better, but beyond the flush possibilities, it has the same problems as its non-suited cousin. The advice below deals with most of the typical Texas holdem games today, with many players seeing the flop and medium to poor competition. In higher limit games and/or those with many good players, both A8 and A8s are best in the muck.

The best thing to do in both limit Texas holdem and no limit Texas holdem from early position with A8 is fold. It is just not profitable in the long run. A8s can be played profitably at non-aggressive and loose tables, but almost all of its value comes from the flush possibilities. If you do see a flop, if you don't improve on the flop you should get away from the hand. Do not put yourself in the position of paying off an opponent with a better kicker. This is a large leak in many players' games.

The same advice as mentioned in the early position section applies here. Fold A8 and play A8s cautiously. If no one has entered the pot you need to either fold or raise with A8s, and the correct play is often a fold. You want many opponents in the pot so you can win a big pot when you hit a flush. A8s does not play that well heads up.

You can enter the pot with A8 from late position when none of your opponents have shown aggression, but it is still correct to fold most of the time, unless you can get heads up. This may seem contradictory to the statement in the last section, but A8 is of almost no value in a pot against a large field of players, so the only situation that it can be in where it has a decent chance is heads up. If you always fold A8 when you aren't in the blinds, you will probably me a more profitable player over time than otherwise. It is just not a very good hand. You can play A8s more often from late position, but if you don't improve to at least a flush draw you will need to get away from the hand after the flop when facing any aggression.

Though it may surprise you, I will often fold A8 from the blinds when facing a raise. It is likely my hand is dominated and the flop will rarely help enough to continue, so it is best to fold beforehand. The A8s is playable, even when facing a single/small raise, but I do fold it in some games as well.