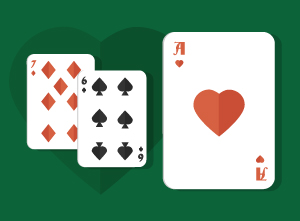 I have combined these hands in one article because they play the same in every situation. These hands are not very strong in any situation, especially the non-suited ones. I fold them over 95% of the time except in the blinds, no matter how loose and/or passive the game is. The suited ones, A7s and A6s, have very little value beyond the flush possibilities.

They can't make a straight using both cards and when you do pair your Ace it is likely one of your opponents has a better kicker. If you are a new player just learning the correct starting hands to use, I suggest folding these hands everywhere but in the blinds. When you do play the suited hands above, they require many players in the pot with you to create a large enough post flop pot to make up for the times you don't hit your flush. These hands are not very strong and they are very hard to show a profit with over the long run.

Fold these hands in early position. By the time you reach the level of experience where you can understand when it is correct to play these hands, which will be rarely, you will be beyond the scope of this article. Until that time you will be more profitable folding them every time.

These hands play the same from middle position as they do from late position. If there are already two or three players in the pot and the game is very passive, you can limp with the suited cards, but get away from the hand after the flop if you don't improve considerably. Just the same as early position, it would not be incorrect to fold them every time.

The suited hands can be played when you have plenty of opponents in an unraised pot, because the blinds will rarely raise, and if they do, most, if not all, of your opponents already in the pot will stay for one bet. It is still correct to fold the non-suited hands, even in a large multi-way pot. One of the biggest leaks in many Texas holdem players' games is playing Aces with small kickers. If you stop playing them your game will instantly improve.

In an unraised pot, I always see the flop from the blinds with these hands. In a raised pot I fold the unsuited hands and will call a single bet with the suited ones if it appears there will be at least four players to the flop. If I don't flop four to a flush or two pair or better I fold to any bet after the flop.