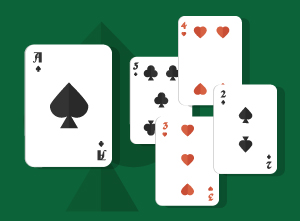 If you have been following this series, you will notice that most of the articles contain advice about only one hand. The reason I have combined all of these hands here is they are all played exactly the same way. These hands are similar because they can all make a straight and are very weak kicker wise. The great majority of the time it is correct to fold these hands, so if you have any question about whether or not it is correct to play in a particular situation, it is best to fold. The suited hands are stronger than the non-suited ones, but even they are weak because the flush will not come often enough to make them profitable in most situations. These hands require a large number of opponents to build the pot after the flop when you hit a hand. They do not play well in short handed pots; so avoid this situation at all costs. It is worth missing a few opportunities to play them when you aren't sure the situation is ideal.

In all but the very loosest and most passive games, all of these hands should be folded from early position. If there is any chance of a raise behind you, which there is in most games, these hands are not strong enough to enter the pot. Even in a game where five or more see every flop without a raise, it is incorrect to play the non-suited hands listed above. The suited ones are just barely playable in these games, but usually can be played because when you hit your flush the pot will tend to be very large, making up for the many times you don't win. Even in the games it is safe to enter with the suited hands, you must be disciplined enough to fold after the flop if it doesn't help you considerably. If you never play another one of these hands from early position you will most likely be a more profitable player.

Play these hands the same from middle position as from early position. If there has been a raise, the correct play is a fold.

If the pot is not raised, I always see the flop with these hands. When the pot is raised, I will call a single bet with the suited hands, if there are many opponents. In both situations, if the flop does not help me I will get away from them to any aggression. Even when the flop contains an Ace I will fold to aggression. It is very likely that I am out kicked.