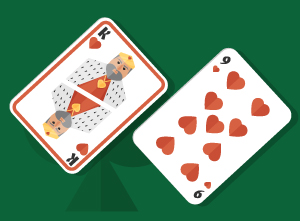 KT and KTs can start to look very good, especially when you have been getting more poor starting hands than normal, but you need to be careful, especially from early position. These hands are not very good. KT can make a straight, but the rare times it does happen it is rarely the best possible straight, and the times you hit two pair on the flop, it is likely that one of your opponents has at least a draw to a straight. Hands that are usually in play are AQ, AJ, AT or even QJ. Any of these hands can beat you if the turn or river is unfavorable to you.

The suited KT is slightly stronger than the non-suited hand, but there will be times when you hit a flush and still lose the hand to an Ace high flush. This all leads to a large problem for many players in that they will play passively after the flop. By playing passively, you allow the drawing hands a free or cheap chance to catch you. There are some games where I won't even play KT from late position, but just like most things in poker, I have been in games that I could play it from early position for a small profit over time. KT and KTs are hands that you don't have to play to be profitable at most levels, so if you decided not to play them at all you won't be giving up much profit.

By the time you gain enough experience to play KT and KTs from early position profitably, you will be beyond the scope of this article. The situations have to be perfect, including a very loose and passive table. You must have many players in the pot with you and they have to let you draw on the turn and river cheaply in order to be profitable. This doesn't happen often, so I suggest folding from early position.

KT should be folded most of the time from middle position, possibly all of the time. KTs gains some value if there hasn't been any aggression from any of the early position players. It is a drawing hand, and unless you flop a flush draw or pair your King, you may be way behind. Hands that are possible are KQ and KJ. If you pair the Ten, it is possible an opponent has AT, which also puts you behind by a great deal. In games with many solid players, they are both folds.

In most low limit games you can play both KT and KTs from late position because of your positional advantage. You should still fold KT to most raises, and be prepared to fold KTs after the flop unless you improve to a strong draw or better.

Unless there has been a raise, you can play both KT and KTs from the blinds. In most games, you can play the KTs for a single raise, but don't forget you will be playing out of position the rest of the hand.