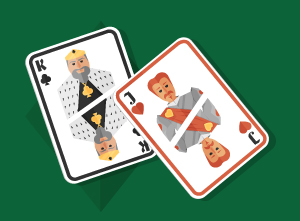 To put them in the best light, KJ and KJs are drawing hands. They must improve to win, but they do very well when they hit straights and flushes, as there will be other hands that have a piece of the board that will tend to pay you off. For these reasons, you should try to play these hands with many opponents in order to maximize the size of the pot when you do hit a big hand. Though you can show a profit with KJ and KJs against one or two opponents, this is usually accomplished when you have positional advantage. KJ is a very dangerous hand in no limit Texas holdem, as even when you hit a pair you won't have the best possible kicker, and may end up paying off a better hand. KJs is slightly better in that it can give you a redraw to a flush, even if it is only a back door one, so you will still have outs against a hand with a better kicker.

I suggest folding both KJ and KJs from early position in no limit play. These hands require proper position to play profitably in no limit. In limit play, if the table is loose / passive you can play both from early position, but if the table is tight / aggressive, the KJ is an easy fold and the KJs should be played with caution. It would not be incorrect to fold both every time at a table with many solid players.

In no limit play, unless I have control of the table, I will fold KJ from middle position. KJs is playable if the players yet to act behind you don't tend to raise often, but if they do, you will be playing out of position, so it turns into a fold. In limit play, if the pot is unraised, I will often enter with a raise to try to gain position. In a raised pot, fold KJ and call with KJs unless the raiser is very tight, then a fold is correct.

From late position in no limit play, if the pot has been raised, it is usually best to fold KJ. If the raiser is a good player, KJs is also a folding hand, but in most lower limit games it is strong enough to see the flop. If the pot has not been raised, KJ is playable. In limit play, if there are plenty of opponents in the pot, you can play for a single raise. With KJs in an unraised pot, it may be a good idea to raise about 50% of the time. This is not with the idea to knock out any of your opponents, but to build the pot when you have what may be the best hand and position.

In limit play, I recommend seeing the flop with both KJ and KJs for a single raise or less. KJ is generally a fold to a raise in no limit, while KJs can call a small raise. Both are playable in an unraised pot