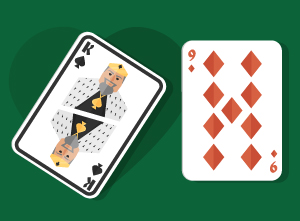 All of that being said, there are situations where you can play these hands profitably, such as loose / weak games where your opponents call with many poor hands and let you control the action after the flop. I do not suggest playing either hand in most situations against a table full of solid players, especially the non-suited hand, and neither of them anywhere but in late position and the blinds. To play them profitably against solid players requires positional advantage.

I rarely play either K9 or K9s from early position in any type of game. To do so profitably, your post flop play must be extremely good and you must have a good read on your opponents. The best strategy is to wait for a better position to risk your chips.

K9 should be folded from middle position, but K9s can be played in certain situations. If two or three players have already entered the pot and the table is loose / weak, it can show a small profit over time to limp into the pot. You must be prepared to get away from the hand after the flop if you don't improve to at least a flush draw or better.

In most games, you can play both K9 and K9s from late position if the pot has not been raised. K9 is still a marginal hand and your post flop play needs to be fairly good to show a profit. The K9s is much stronger in late position because of the added possibility of a flush. In a loose game with many players already in the pot, I will even play the K9s for a raise, but will fold the K9 most of the time. Just make sure you don't get too involved in the hand if the flop doesn't improve your holding.

I usually play K9s in the blinds, even for a single raise and K9 when there hasn't been a raise. You will be in the worst position for the rest of the hand, so don't hesitate to fold either hand if you feel you are dominated. By folding, you won't be giving up much long-term profit, if any at all, by folding.