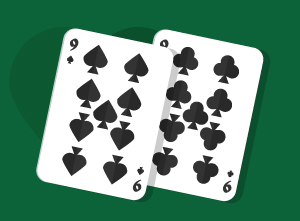 Though you should raise occasionally with 99 to keep your opponents from reading your hand, I always play 99 for set value. I do not fall in love with it and almost always fold to any aggression after the flop when I don't make my set, even the few times the flop contains cards smaller than my Nines. There are just too many hands that can beat you. I will call single bets in limit Texas holdem in this case, but I am very wary in no limit Texas holdem.

In aggressive games with a great deal of pre flop action; it is often best to fold 99 from early position. Your goal is to hit a set, and this will only happen roughly one out of every eight flops. So if you have to put two or more bets into the pot pre flop, it makes it much more difficult to win the required amount to show positive expectation when you do hit a set.

In loose / passive games, I usually limp from middle position with 99. In tight / aggressive games I will usually fold. In loose games, not only does there tend to be more money in the pot pre flop, there also tends to be more callers when you hit a set. Both of these greatly improve your pot odds. On the other hand, in a tight / aggressive game, there tends to be fewer players pre flop and your opponents are less likely to pay you off when you do hit a set. Both of these greatly reduce your pot odds.

With hands like 99, you have the opportunity to use your position to its greatest advantage. If all of your opponents have not shown strength, you can enter with a raise to take control of the hand, or limp in with the improved pot odds. In a limit game, unless there are many players in the pot, if the pot is raised it is probably correct to fold. On the other hand, in no limit play it may be correct to call an early position raiser in hopes of taking their entire stack when you hit a set. This is only correct when both you and your opponent have at least eight times the bet you must call remaining.

Because you already have a bet or partial bet in the pot, you are receiving strong pot odds in most cases to enter the pot in the blinds, even for a raise. I do not recommend raising from the blinds with 99, as it is very unlikely that you will get any of your opponents to fold and this reduces your pot odds. If you don't hit a set on the flop, occasionally you may bet on the turn in hopes of picking up the pot, but most of the time you should check and fold to a bet. Even if you do currently have the best hand, it is hard to tell for sure and you are in the worst possible position.