Pitfalls of Watching Poker on Television 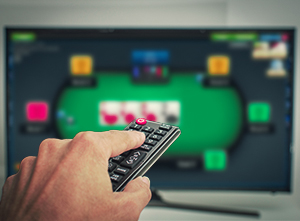 I am like many poker fans and have greatly enjoyed watching the wide range of poker programming on television over the last several years. It seems that any night of the week you can find a poker tournament, whether it be a re-run of an old World Series of Poker event or a new made for TV celebrity tournament. While these are definitely entertaining, especially for someone who understands something about the inner workings of poker, they do have a possible dangerous side effect on inexperienced players. At least it can be dangerous to their bankroll and development as poker players.

The thing that many people who don’t play much poker don’t realize is that they only show the exciting hands on television. They don’t show the hundreds of hands where the pot is won uncontested pre flop or where everyone folds to the blinds. In other words, the 90% of the game that leads up to these big hands. By only watching poker on TV, the novice may very well believe that someone ends up all in on almost every hand.

Televised poker also mistakenly leads thousands of new players to believe that they can just learn the basics of poker and instantly sit down and start winning money. Almost all of these players end up broke, many of them never to play again. They don’t realize the hours of hard work and study that goes into even becoming a marginally good poker player, much less a winning one.

If you have been watching poker on television and decided to give it a shot yourself, here are a few guidelines that may help you make an easy transition into the game:

On the other side of the coin, if you are an experienced poker player and are looking to take advantage of these many new players, here are a few pointers for you as well: