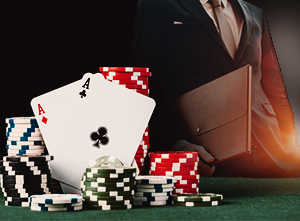 A hand I played on a recent trip to a local poker room makes a good case study, so I decided to share it with you. The reason it is good for a study example is it involves numerous important, yet subtle, points that all good players understand, but many beginning and losing players never think about.

I was playing at a $200 buy-in no limit Texas holdem ring game with a full table of ten, and was in early position. I was dealt A Q suited, raised to $15 total and was called by a player in middle position and one of the blinds. We were all deep stacked, having over $200 each when we started the hand. With the flop came Queen high, giving me top pair with top kicker, but it had two Clubs, which weren’t my suit. The blind checked, I bet $30, and the middle position player raised to $60, the blind folded and I called.

In hindsight, this was a very weak call on my part. This was a raise or fold situation that I misplayed. Fortunately, as you will see shortly, it worked out for the best, but I was lucky my opponent didn’t complete his hand.

The turn was a blank and I checked. My opponent bet $50 and I raised to $100. My plan was to either win the pot right here or fold if he pushed all in. He made a flat call, which was a very telling action. At this point I was around 90% sure he was drawing to the nut flush, and I used this to my advantage on the river.

The river brought another blank, so he missed his flush draw if that was what he was on. I looked over at him and said, “Well, you sure have me confused. Did you hit a set or something and have been milking me? I check.” He quickly fired $70 into the pot and I called. As soon as I called he mucked his hand and I turned over my A Q and won a big pot with top pair.

Now, looking back on the hand, I didn’t play it perfectly and if I had been 100% sure about the flush draw I would have raised the river. Though to be honest I didn’t have enough behind at that point to make much of a difference. There is one more very important fact that I haven’t shared with you yet that came into play during this hand.

He had shown a nice bluff right after I sat down at the table so I knew he was capable of bluffing, and I also knew he was a decent player. He had also seen me lay down a couple hands in tight spots. These two things lead me to believe that he would bluff on the river if he missed his flush.

The pivotal play in the entire hand was when he just called my check-raise on the turn. This action screamed that he was drawing to me. Now you must understand that a very advanced player is capable of playing this way with a monster hand, but it is a rare sight at a $200 buy-in table.

Here is what you need to learn from this hand.